I am really interested in the ideas of artistic voice, identity and recognition.

Over the summer I had a number of artists approach me with questions about their portfolios, marketing and pricing, etc. In looking at some of these I saw so many artists that were kind of all over the map with regard to style and technique – you know, the kind where each and every artwork looked like it might have been the work of a different person.

I advised them to pick something and stick with it for a while so they could really become a master at something and not be just okay at a lot of different things. I wanted them to tap into that part of themselves that really defines them – to find their voice.  I believe that mature successful artists are keenly aware of their voice. Not to say that artists don’t explore different things – ideas get resolved in different media, subject matter changes, etc. As a collector and a consultant, what I want to be able to see is, that as the works change, I can still tell it is the work of one artist and not some other artist entirely.

This past year, I was invited to curate a show this month at VERTIGO Art Space in Denver (Jan4-February11; www.vertigoartspace.com)  and so I used this line of thinking as the starting point for the show and – wow! I quickly realized what a hot button topic this is…almost everyone has something to say about it.  A lot of artists feel basically the same way. Others think I am looking at it from a business point-of-view and that I didn’t get art at all.  I think some were offended that I would point out consistencies in their work because there is such a drive to be original and fresh and authentic.

Some gallerists told me that they value creativity over commercialism – others pointed to the realities of business, that for a gallery to stay in business, eventually something has to sell and customers’ expectations often drive that process.  Artists told me the art they were showing in the galleries wasn’t what they really wanted to be working on- that they want to try something new but that the gallery wouldn’t go for it. Critics were calling artists “Johnny One Note” because they had been there – done that – seen it before. One artist selected for this show told me that as soon as the “recognized” series changed in favor of something else, the collectors, critics & galleries stopped even looking at the work.

I looked at my own work – as an artist, I am almost always associated with the burnout vellum pieces, but then I go off and explore other tangents like the series of 3000 photographs of sidewalks or the watercolors or the monochromatic eggshell compositions.

As I continued with the exploration for this show, I really began looking at the various tangents or diversions that many artists take.

Over the holidays my partner & I had a party and there wound up being a great mix of people, some artists, some gallerists, some of his running buddies, mutual friends, neighbors, a little family.  That night one our longtime friends came over to me and commented on my burnout vellum pieces – “You know I appreciate and I get where you are going with them, but when are you going to go back to those colorful paintings you did 10-15 years ago?” Later that same night, another friend came to me and wanted to know about some new etchings I had done, “You know I appreciate them and I like the use of color, but when are you going back to the monochromatic burnout pieces?”

I’m now more interested in the issues around the idea of having that identifiable, sellable body of work … the advantages this affords an artist and the potential challenges of restricting creative exploration. There is a balance between the exposure and commercial success that recognition provides and the harness restricting creative exploration.

The 6 artists that I included in the show present 2 pieces – one that would be from their recognizable body of work and then another that is unrelated and not immediately identified as belonging to the same artist. 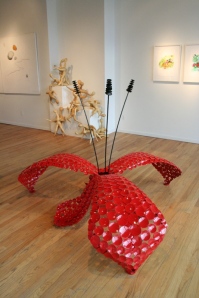 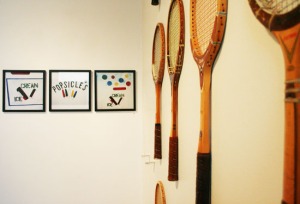 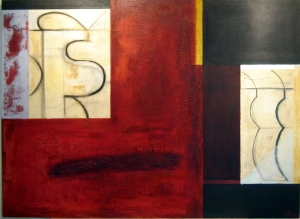 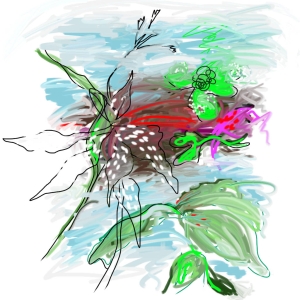