I often write about the art I see during my travels, but the reality is there is a lot to see right here in Denver.  A couple months ago I went with an art historian to The American Museum of Western Art. It was a treat and really a must see in Denver’s growing art scene.

The museum is the showcase of the Anschutz Collection, arguably the best private collection of western art in the world.  It packs, salon style, as many pieces as it possibly can into the 4-story Italianate building from the 19th century (The building itself is worth checking out and has a storied past – read http://www.westword.com/2012-05-31/culture/museum-of-the-american-west-anschutz-collection/  for more information.) There are more than 600 pieces covering works spanning 150 years of artists’ engagement with the West.

The museum is generally planned according to movements and schools of art and while not exactly in chronological order moving from the oldest works on the lower level and up to the most recent on the upper levels.  It is useful to think about these schools and movements and you progress through the museum – there is so much to look at, it helps to organize the experience and see the works in relation to what other artists were up to at any given time.  Docents typically lead you through the floors, but I am told visitors are free to wander.

The main groupings of works include:

The Expeditionary Artists (George Catlin, Seth Eastman, Alfred Jacob Miller, John Mix Stanley); these guys generally went along on expeditions and scouting adventures to record journeys though the west. Their paintings often showcase the interactions with various tribes and depict trappers as they developed the fur trade.

Hudson River and Rocky Mountain Schools ( Albert Bierstadt, Thomas Moran, Worthington Whittredge); these painters typically lived in New York City  and often are most known for their paintings of the Hudson River Valley and later, the Rocky Mountains. These landscapes are filled with light and convey a sense of splendor.

Narrative Artists (George DeForest, William De Leftwich Dodge);these guys were the basic story tellers and depicted what was actually happening as settlers took hold in the west.  They took inspiration from the Renaissance, focusing on playwrights and writers, and poets while telling stories of battles and the gold rush.

Interpreters of the Old West (Frederic Remington, Charles M. Russell, Charles Schreyvogel); even as the West was quickly developing into a major hub of urbanization, the public embraced their depictions of heroic frontiersmen and the idealized landscapes that filled the pages of papers, magazines and dime-store novels.

Illustrators (NC Wyeth, Dean Cornwell, Herbert Dunton); these artists of the early 20th century were the favored illustrators for short stories, novels and magazines.  Because of the publications, theirs are the iconic images most recognized.

Taos and Santa Fe Schools (Ernest M. Hennings, Ernest Blumenschein, Walter Ufer); these guys were educated artists in search of subject matter. As they travelled west, they basically landed in northern New Mexico and stayed. They developed a style of Southwestern art that is immediately recognizable.

New Deal Artists (Maynard Dixon, Victor Higgins, Frank Mechau,) In the 1930’s Federal programs including the Works Progress Administration and the Section of Painting and Sculpture employed artists to commission paintings for post offices, state capitols, and government buildings. Many of these paintings were murals that depicted the strength and resourcefulness of Americans and the bounty of the landscape.

Expressionists (Marsden Hartley, Birger Sandzén); these artists were modernists, they conveyed emotion through manipulations of color, surface, and form.

Cubism and Abstraction (John Marin, Georgia O’Keefe); it is at this point in the tour of the museum that I really began to notice how quickly styles of art were changing, not only in the West, but around the world. The museum speeds through different modernist styles.

The size of the museum belies the collection – it really is so extensive that you can go back to again and again and continue to see different things and learn more about the development of art of the West and how it relates to the history of our country. (http://www.anschutzcollection.org/) 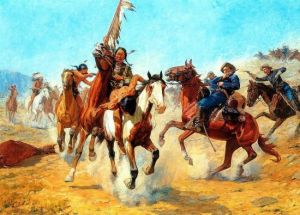 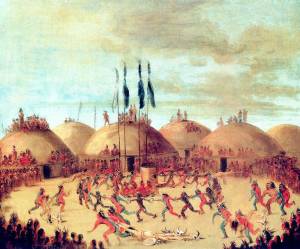