If you only get to see one show in Denver, you really should check out the David B. Smith Gallery.

Michael Theodore fills the main gallery with an installation called “endo/exo.” At first glance (and I think probably in most of the image shots) it looks like industrial scaffolding; the lighting effects on the complex web of fibrous knots hint at stage design. It takes up the entire space and ultimately, he’d like to make it even bigger – like hundreds of feet bigger!

Take your time with it because it has so much to offer.  I got the chance to chat with Michael the other day and he explained a bit about his fascination with rhythms – both organic and mechanic (this makes total sense – he is a music professor); he envisions an increased interdependency…a symbiosis of man and machine.  It’s more than just man and machine, but really an exploration of the increased layering of complex systems and how they interact.

It’s easy to infer an influence of other artists who are working with light – Olafur Eliasson, James Turrell, Leo Villareal, and perhaps that’s right, but the work is more than that. It actually reminds me a bit of the installation in the Fuse Box at the Denver Art Museum; coincidentally, Annica Cuppetelli and Cristobal Mendoza have installed an interactive light display on rope. Their imagery responds with movements and sounds that draw the viewer’s attention away from the actual rope and into the digitized realm of human/computer interaction.

Micheal’s ropes never leave his story, they are held captive by the confines of the machine – there is a human/computer interaction here too:  lights change, the tick, tick, ticking of the clocks (okay, not actual clocks, but motorized ticking rods that could be clocks) speeds up and slows down, pausing for effect.  I find the narrative to be compelling – spellbinding, a bit sinister, and absolutely of the moment.

The rest of the show includes gorgeous generative loops on paper, delicately engraved scratchboards, and a series of video works and printed stills on view in the loft space.

There are a lot of shows in Denver right now that I have already written about – many of which are closing soon, but this one is up for a couple more weeks (June 15th). If you haven’t seen it already it is the one to rush out and see. 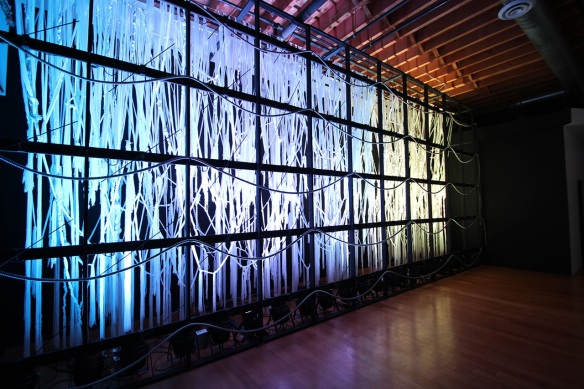 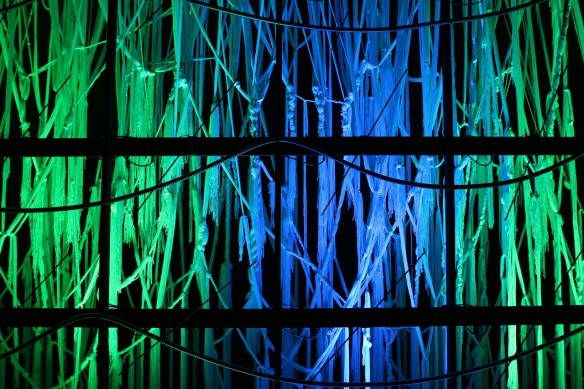