“Man is no longer an artist, he has become a work of art.” Friedrich Nietzsche

Who’s to say that a circle is more significant than a square or a triangle…shapes are shapes.  Letters are shapes too – if you can divorce the symbolic connotations from letters grouped together to form words and just begin to admire the individual letters for their shapes, you can begin to understand the world of Roland Bernier.  For Roland, words are compositions of form, worthy of admiration.

There are many text-based artists whose works are really focused on the meaning of words or phrases – I immediately think of Barbara Kruger, Glenn Ligon, and Lawrence Weiner. Not all of Bernier’s work is devoid of reference, but that is not the main focus of his work.

It’s so rare to see anything truly new, but Bernier has been a pioneer; he started working with text-as-form some 50+ years ago. Since then, any number of artists have followed suit – consider Nancy Holt’s photograph “Concrete Poem” and Mel Bochner’s “Blah Blah Blah” paintings and even more recently of Thomas Müller’s ceramic forms in his show “Nothing Rhymes with Orange”, Fionna Banner’s “Concrete Poetry” and Jaume Plensa’s “Figurative Sculptures.”

I have visited Bernier’s studio a number of times to check out his archives (some is missing, but he has inventory dating back to 1965) and have seen eight or so shows at the Denver Art Museum, Spark Gallery and Walker Fine Art; I love his stacked words, the words on wheels, the cross words, his hysterical “What a Dump” series, “Talking in Circles” and his hands series.

My all-time favorite pieces are his more recent signature series.  After seeing some of his other shows, I went to see this body several years ago and initially tried to dismiss them. I found myself going back – the second time I saw his empty frames with nothing more than his signature, I recognized he was onto something. The third time I visited that show I understood: so much of art is about the signature – people rush up to look for the name.

Roland is now in his 80’s and for the past 5-6 years he has been acutely aware of his own mortality. His introspection leads him to explore the merger of art with artist. He now prefers the use of his own name in favor of more randomly selected text, covering literally anything and everything with his signature over and over and over …and over again, the latest pieces only with his last name. He is not morose, “This might be my last show, so I am only using my last name,” Roland says smiling, happy with his clever use of words.

Roland Bernier is represented by Walker Fine Art where “The Last Picture Show” is on view June 7-July 12. www.walkerfineart.com 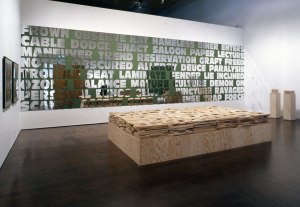 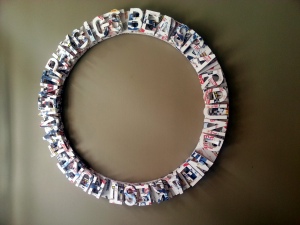 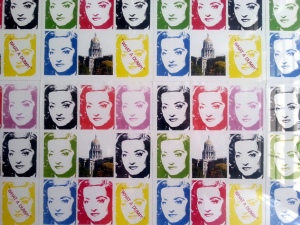 Roland Bernier, “What A Dump” at Walker Fine Art

Some other artists using text as compositional form: 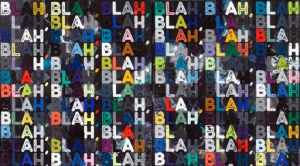 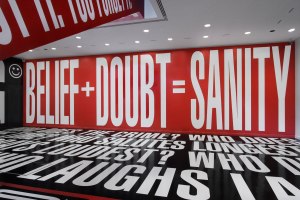 Barbara Kruger at the Hirshhorn

Glenn Ligon at the Whitney

Lawrence Weiner at the Guggenheim